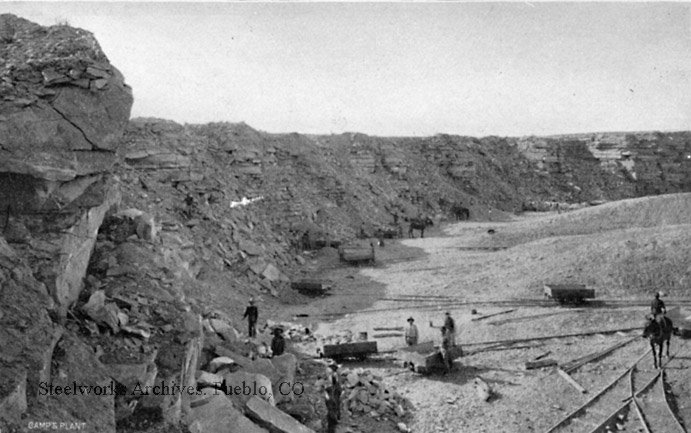 In 1881, the Colorado Coal and Iron Company, under the direction of William Jackson Palmer, purchased a quarter-section of land near the Denver and Rio Grande Railroad’s San Carlos Station, about six miles south of the company’s brand-new steelworks plant in Pueblo. This plot of land contained a large deposit of Limestone, an integral component of the smelting and steel-making processes. A quarry was established on the property, and a contractor was hired to quarry, crush, and load stone onto railroad cars, which were then shipped to the steel mill and various smelting operations in Pueblo. Officers of the company, which had since merged with a competitor and changed its name to the Colorado Fuel and Iron Company (CF&I), decided to take over operations of the quarry in 1897. CF&I constructed housing for its workers and their families, along with a one-room schoolhouse for the many children who would come to call a secluded stone quarry at the edge of the Great Plains, home.

By 1902 a steam-powered rock crusher capable of handling 1200 tons of rock per day was in operation at the quarry. Limestone was blasted from the quarry bed, broken with sledges into pieces convenient for loading into pit cars, and transported by mule to the crusher. There it was reduced to a standard size (about two inches in diameter), after which it was screened to remove shale and other debris and placed on railroad cars to be sent off to Pueblo. Shipments to the steel plant averaged about 600 tons daily, and a smaller amount was sold to local smelters of precious metals.1 The town had a boarding house, a stable, and several homes by this time, along with a general store that, according to CF&I’s company newsletter Camp and Plant, stocked “a very fresh and clean supply” of groceries. Being so close to Pueblo, dry goods and other products were not readily available in the town of Lime, and it was one of only two CF&I company towns that did not have its own medical dispensary. [2]

One man who worked for CF&I at the limestone quarry for over 20 years, and raised his three children there, wrote about his experiences in a document that recently made its way to the Steelworks Archives in Pueblo. His name was J. Roy Rennie, Chief Clerk, and he began working in Lime in 1909, several years before the town or quarry had electricity. At the time Mr. Rennie started the rock was still processed through a steam-operated crushing plant, and the only phone line in town went straight from the Superintendent’s office to the mill in Pueblo. Homes were lit by coal-oil lamps, and what little street lighting was available was by means of coal-oil lanterns set on poles in the ground. They had to be cleaned and filled daily, and the lights were often blown out on windy nights.

There were six wood-frame houses in town that had been relocated there from a coal camp in the Walsenburg area, a two-story wood-frame building that was occupied by acommissary and an eight-room boarding house, and the schoolhouse, which had added a second room by this time, that stood on a hill overlooking the camp. The single-track railroad running along the east side of the camp, Mr. Rennie tells us, had the reputation of being one of the busiest pieces of single-track in the entire country. Trains from the coal mines to the south shuttled back and forth almost constantly, and derailments and wrecks along the line there near the St. Charles River were common.

As time went on, and the demand for limestone at the Pueblo plant increased, CF&I instituted a project to enlarge and modernize the town. New houses were built, the steam-driven crushing plant was replaced with an electric one, the school was enlarged again, and a new store was built to be operated by the Colorado Supply Company (a subsidiary of CF&I). They also built a new double-track railroad from Pueblo to Walsenburg in 1912, which led to an unusual flurry of activity. Contractors on the railroad job set up temporary camps in the vicinity, and there were at one time more than a thousand men living there “with a consequent of lawlessness and drunkenness.” [3]

The area surrounding the limestone quarry wasn’t only inhabited by CF&I employees during its years of operation. There are stories of hermits living in nearby limestone caves that were carved out by rain and flooding, and Mr. Rennie tells us of an encounter he had with an old woman who lived alone in a shack on “Water Barrel Flats” south of town. There were also drifters who passed through Lime, some of which would set up camp for a few days and do odd jobs to make extra cash before moving on. One such man, who made his way to Lime from a small town in Texas, was found dead along the Saint Charles River by a group of Boy Scouts. Though his death was ruled to be of natural causes by the Pueblo County Coroner’s Office, gossip and conspiracy theories about the incident spread around town for weeks after the man’s body was loaded into a “motor hearse” and taken to Pueblo for burial. [4] Lime, it seems, wasn’t so different from most other small towns in America.

The quarry operated regularly until 1931, when CF&I ceased operations in favor of a new quarry that was opened near Monarch Pass. Limestone from Monarch was found to be of higher quality than that of either Lime or CF&I’s other quarry, Calcite. Mr. Rennie himself was transferred to this new facility, along with all of the equipment and most of the personnel from both Lime and Calcite. A few of the town’s inhabitants stayed behind, however, and the area wasn’t completely abandoned until the 1960s.