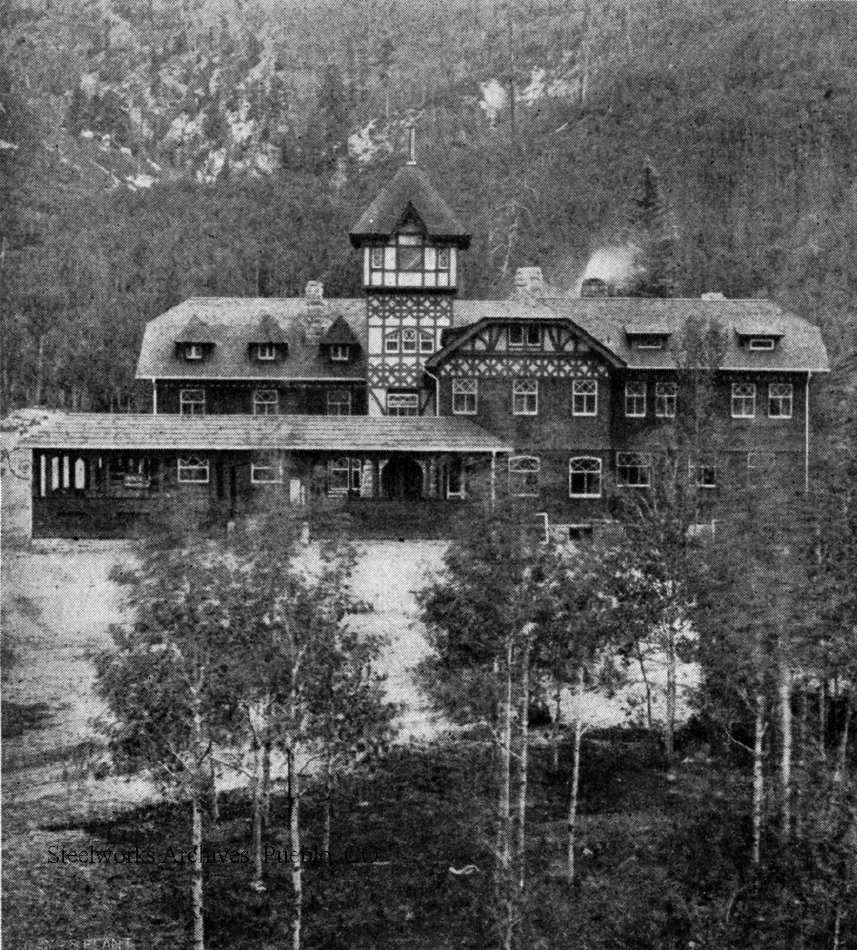 John Cleveland Osgood began development of the Redstone Industrial Enterprise in 1899 by building 100 coke ovens on the west bank of the Crystal River near the junction of the Crystal River Railroad and the narrow gauge railroad (the “high-line”). During the next two years, 150 more coke ovens were constructed to complete what Osgood planned to be the “largest coking plant in the state.” His decision to establish a coking operation was short lived however, as he found it was not economical to haul coke from the western mountains to Pueblo’s Minnequa Works hundreds of miles away. He decided instead, to focus on improving the lives of his miners he had hired.

Influenced by the tradition of English country living, Osgood built Cleveholm Manor in the Tudor Revival Style in conjunction with his interpretation of a proper English manorial layout, the larger managerial houses on the top of the hill overlooking workers’ cottages.

“The town of Redstone was to be the jewel of the Colorado Fuel & Iron Company and the showcase of the Osgoods ... Whereas the prevalent attitude toward the social welfare of the workers in the coal industry was indifference, bordering on neglect, Osgood seemed to view the situation differently… According to Osgood, if his workers were happy and contented, they would stay with him regardless of things such as labor strikes.” With the unrest of multiple strikes throughout mining districts of Colorado at the turn of the century, Osgood sought to provide neat, clean, and modern homes for his workers. Osgood named his new community Redstone.

The majority of the worker’s cottages in the village lined either side of what is now known as Redstone Boulevard. More than 80 homes were constructed for use by the miners and their families. The square, four room structures with hip roofs and lap siding were complemented by whitewashed board fences that ran along the road in front of all cottages. Fences also divided the yards of individual houses. One cottage was artistically and inexpensively furnished to serve as a standard for other homes. All cottages and houses had electricity, running water and lath and plaster interiors with wall coverings. Some of the larger homes had bathtubs. CF&I’s publication, Camp and Plant, touted Redstone’s cottage in 1901:

“These cottages, or a greater number of them, will be occupied by the Italians, who are coke and stone workers. They believe that their health will thus be greatly improved. Beauty has been a guiding principle in the building up of our little town. We do not have monotonous rows of box-car houses with battened walls, painted a dreary mineral red, but tasteful little cottages in different styles, prettily ornamented, comfortably arranged internally and painted in every variety of restful color. ”

Following the turn of the century, the rent for the standard type of house was between $2-$4 per room per month with water furnished free except in the mining camps of Frederick and Segundo (in Las Animas County) where the company charged $0.25 per room for water. Little change was made in the cost of the rent over the next decade. The average underground miner’s wage in 1902 was $2.80 for a 10 hour shift. The miner was charged $0.35 per month in other mining camps for each electrical outlet in the home and between $1.50 and $2 per ton for domestic coal for cooking and heating. In 1918, the company boasted that 100% of the receipts from rentals were put back into the employees’ homes for repairs and improvements.

Friendly competitions between mining camps and the miners themselves were encouraged to beautify the properties through company sponsored contests. To further this work, from the 1910s to the 1930s, the company graded streets, installed streetlights, constructed sidewalks, planted trees, and assisted with sanitation efforts.

Osgood went a step further than providing clean, comfortable homes to his workers. In the summer of 1901, Osgood created a program for “the social betterment for the workers.” Under the direction of CF&I’s chief surgeon, Dr. Richard Corwin, the newly developed Sociological Department saw to “bettering of the conditions under which the workers live.” The department launched five different programs including education, social and industrial training, housing, and communications. Kindergartens began in mining camps to help form good citizens, who would in turn, become good company employees. Adult education classes were also conducted to teach employees how to improve themselves and their families. Specific examples of classes for miners’ wives were sewing, cooking and how to prepare nutritious and wholesome food. The program’s weekly newsletter, Camp and Plant, was circulated to employees providing cultural and social information about individual and community activities, secular and religious customs of the ethnic groups that made up the CF&I community, short stories and anecdotes. In addition to the social based articles, commentary on various departments was also provided. The publication featured a translation of numerous articles in Italian, German, Slovenian and Spanish for the benefit of its non-English speaking workers. A special edition of the Coal Basin and the Crystal River Railroad were written in 1902 and 1903. Camp and Plant also reported weekly news of Redstone in its “News Items” section.

For other entertainment needs, recreational halls and club houses were built in nearly every mining community, including Redstone. These clubhouses frequently housed the Sociological Department’s rotating painting and sculpture collections and traveling libraries. Books included classic novels by Dickens, reference manuals such as Encyclopedia Britannica and “technical manuals on engineering, mechanics and kindred subjects.”

With the attention of eliminating the drinking of alcohol, which Corwin felt was the root of the majority of problems associated with the mining districts, Corwin experimented with eliminating its consumption was to afford a diversion to allow “soft drink clubs” with reading rooms, billiard and pool tables and a bar that served only coffee, chocolate and bullion. In Corwin’s belief, the facility was designed to serve the entire family rather than only the male wage earner.

In an era long before digital entertainment, musical entertainment was found within CF&I’s mining camps. Formed in 1902 under the direction of Professor Eliseo Jacoe, the Redstone band performed and practiced on the second floor of the fire station. Each member was provided a uniform and an instrument of triple silver plate purchased from Lyon and Company in Chicago. The band often played original compositions written by Professor Jacoe.

Schools were provided in nearly all CF&I mining communities for workers’ children. The school at Redstone opened in the fall of 1902 and contained three large classrooms, four smaller rooms for domestic science work, manual training and display purposes, principal’s office, library, and two playrooms in the basement for sporting and athletic events. In 1904, the Redstone School taught 69 pupils.

For those who became injured or ill, a medical dispensary was available at Redstone. After the creation of the Colorado Fuel & Iron Company’s Medical Department in 1880, the Medical Dispensary division was maintained under the supervision of the company’s Chief Surgeon, Dr. Richard W. Corwin. The dispensaries treated minor illnesses and injuries. More serious ailments were treated at Pueblo’s Minnequa Hospital. With the help of nurses, each camp doctor oversaw the dental, optical, and overall medical health of the employees and their families within the district. Doctors made daily house calls in addition to seeing patients in the dispensaries. Doctors were instructed to treat all illnesses with the exception of sexually-transmitted diseases and those incurred during the commission of a crime.

To meet the material needs of the workers, as in other CF&I company towns, was the Colorado Supply Company store. In addition to selling grocery items, the store also sold dry goods, home goods, clothing, and even alcohol in some of the stores. Some stores in CF&I’s most populated company towns offered a mail order business, milliner’s services, bank and post office within its walls.

According to noted historian and author H. Lee Scamehorn, critics claimed that CF&I and the Colorado Supply Company used their own system of money to compel employees to trade in company stores, which deprived local merchants from serving miners and steelworkers. CF&I reiterated that it paid its workers in cash, it was the only between paydays when employees asked for cash advances that the company issued scrip to be used in the company store. The use of scrip by the Colorado Supply Company was discontinued in December 1912. However, as printed in CF&I’s publication, Camp and Plant, CF&I did use scrip and wrote of it not being compulsory, but of benefit to the miners. “It is to his advantage to be able to obtain advances on his pay for his needs before payday arrives.”

When completed, the village of Redstone boasted amenities that were not found in other competing company towns. These included a theater complete with dressing rooms, lights, scenery, and an arc stereopticon. The clubhouse served as a community center for dances, lectures, parties and concerts.

Within the clubhouse were a billiard room, card room and reading room. Within the town were other amenities such as a post office, train depot, assay office, blacksmith shop, and two hotels: The Redstone Inn and the Big Horn Lodge.

The Redstone Inn was built to house bachelor miners. Modeled after a Dutch Tavern, the full service hotel also housed traveling salesmen. The other hotel, the Big Horn Lodge, was more opulent in design, and catered to members of the CF&I Board of Directors and overflow guests of the Osgoods.